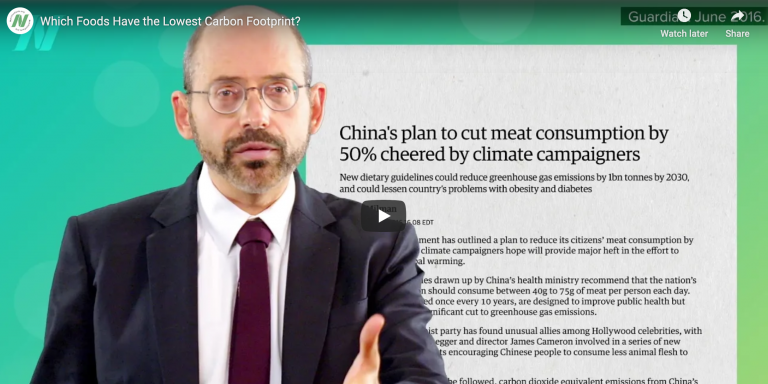 27Nov20: The Best Foods And Diet For The Planet

Yes, that’s Dr. Michael Greger, nutrition mega-expert and Sedona VegFest 2020 speaker, whom you might expect to see on our Health News page, rather than here. His many hundreds of videos on whole food, plant-based diet are our go-to source for managing personal health. Fortunately for us, Dr. Greger has applied his uncompromising analytic rigor to summarizing the research on foods and diets that have the lowest carbon footprint in a pair of recent videos. If you, like we, are sometimes confused by the complicated and often conflicting claims on how to best protect our planet with food choices, you can rely on these videos to give you the best answers that science can provide. 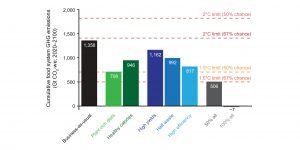 Another landmark study about food and climate has been published in Science, and it illustrates again how critical the move to plant-based diets will be in halting global warming. Most memorably, it concluded that even if all carbon emissions completely halted immediately, the world would still need to employ big dietary changes if we are to stay below the warming limits established in the Paris agreement. The study, led by Dr. Michael Clark at the University of Oxford, compared five different—and aggressive—global food related initiatives: transitioning to a “plant-rich” diet, limiting calorie intake to the recommended allowance, reducing food waste by 50%, adopting technologies for higher crop yields, and switching to high-efficiency agriculture. The one with the greatest positive impact was the plant-rich dietary change, even though it was defined as including a “modest” amount of dairy, eggs, and meat. (Converting to a fully plant-based diet would obviously make this option even better.) While it is essential that we pursue all five of these food related solutions, the scientific evidence again points to the elimination of animal products from our diets as the most impactful thing we can do to help save the planet. Several media outlets have summarized and commented on the study, including the two linked below. 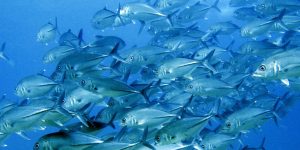 A recent article in the academic journal Science Advances (and summarized in ScienceDaily) reports on the amount of CO2 released into the atmosphere by large, commercially caught fish (tuna, shark, swordfish, etc.). In 2014, ocean fisheries released 20.4 million tons of CO2 just by removing these big fish from the ocean. That’s the annual equivalent of 4.5 million cars. And of course that’s on top of the fossil fuels burned by the fishing vessels often traveling long distances out to sea and back, not to mention a host of other environmental damage caused by industrial fishing. Left to die naturally, these large fish quickly sink to the bottom and their carbon (10-15% of their mass) is sequestered in the ocean floor. But when fisheries disrupt this “blue carbon” cycle by removing these fish, they allow that CO2 to contribute to our planet’s greenhouse gas accumulation. With all that our oceans do to sequester CO2 from our atmosphere, it’s ironic that our demand for fish as food and other products is pulling it right back out again. 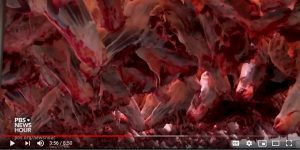 When we heard that raising cattle for beef is causing deforestation and adding to the climate crisis, it gave us pause—at a minimum—to reconsider our dietary choices. But what if we had heard that people were being driven off their land and often murdered to meet our demand for beef? It seems hard to believe, but that’s exactly what’s happening to indigenous people in Nicaragua, and it’s a horror made worse by the breakdown of the U.S. supply chain from the Covid-19 pandemic. The PBS Newshour spotlighted this tragedy, airing a story by Nate Halverson of the Center for Investigative Reporting. It’s a must-see 8:50 video, which is viewable, along with a complete transcript, at the link below. 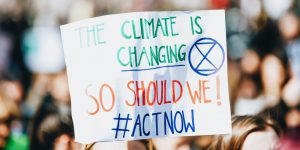 You’ve heard that going plant-based is the single most impactful action an individual can take to help stop and reverse climate change. But how much difference would that actually make? A new study, published in Nature Sustainability, has done the math and reported on three scenarios: business as usual, a 70% reduction in worldwide meat consumption, and a fully vegan global diet. In that last, best case scenario, the equivalent of 16 years of fossil fuel-based emissions would be eliminated. So, a lot! Read more about the study in the LIVEKINDLY article linked below. 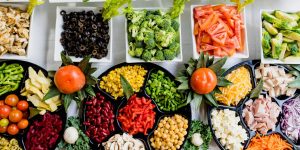 Photo by Dan Gold on Unsplash

This quiz, which we found on the Earth911 website, is designed to test your knowledge about the comparative carbon footprint of various foods. There are five parts to the quiz, each displaying an illustrated list of foods that you’re asked to drag into order, from most to least impactful. For each group, you get three tries to adjust your rankings. After each try, the items you have in the right position will be outlined in green, the others in red. But look quickly, because the colored outlines only display for a couple seconds. After your third try, if you still have some items out of order, you’ll have the option of seeing them correctly sorted. Good luck! (And don’t ask us how well we did!) 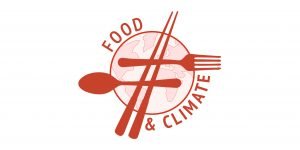 The UK-based website Carbon Brief does a superb job of reporting on scientifically sound climate crisis research. Clear writing, accompanied by many creative and informative graphics, is their hallmark. And the weeklong “Food and Climate” series they launched on 14Sep20 is not to be missed. Each day’s articles are thorough explorations on a number of related sub-topics, and though lengthy, they are well worth checking out. Use the linked contents list below to read each article in full, to sample a sub-topic of particular interest, or simply to scan for the remarkable, sometimes interactive graphics:

Monday, 14Sep20: Interactive: What Is The Climate Impact Of Eating Meat And Dairy?

Tuesday, 15Sep20: In Depth Q&A: What Does The Global Shift In Diets Mean For Climate Change?

Wednesday, 16Sep20: Experts: How Do Diets Need To Change To Meet Climate Targets?
Seventeen climate experts share their answers to this question.

Thursday, 17Sep20: Webinar: Do We Need To Stop Eating Meat And Dairy To Tackle Climate Change?
Four experts on food and climate present brief perspectives on this question, in non-technical but scientifically sound terms, with some excellent visual aids, which are available for download at the site of the link. Presentations are followed by a recording of the Q&A session, with some good questions and answers. The panel: 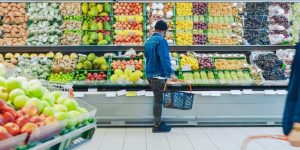 It turns out that we each have a “carbon foodprint” (not a typo). And meat is responsible for half the average American’s. This recent article from Earth911 about how we can reduce ours is brief, but it covers the most important criteria to consider when trying to match our food choices with our environmental values. And it includes a marvelous chart from Our World in Data, which you just might want to print and keep in your reusable shopping bag for regular reference. It ranks over two dozen common foods by their greenhouse gas impact across all seven stages of the supply chain–now that’s thorough! Also, read this article to find out if it’s better (way better!) to cut back on asparagus or avocado. 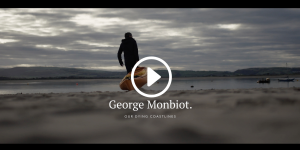 George Monbiot has been one of the most eloquent voices in battling the climate crisis, as an activist, as an author, and as a columnist for The Guardian in Great Britain. In this 4:40 video, filmed by Alex Lockwood, we get to see and hear “Gorgeous George,” (as his fans lovingly refer to him) describe his personal connection with the sea and how the fishing industry has impacted his beloved local coastline and marine health in general.

3Aug20: Animal Agriculture And Its Negative Impact On Climate Change 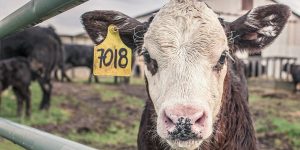 Sentient Media just published Laura Bridgeman’s very thorough and readable summary of the impact of animal agriculture on climate change. If you’ve been frustrated by articles that are either too overly academic to understand or too screechingly biased to believe, this is the article for you. You’ll get a good overall understanding of the impacts, and the author has provided links in key places to substantiate the facts and give you places to go for a deeper understanding. 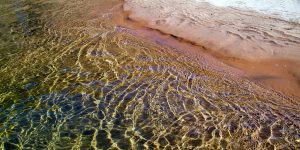 If you’re concerned about the ever lower levels of fresh water in the Colorado River–and who isn’t?–look no further than the cattle being raised for human consumption. The Guardian recently reported on a scientific paper published in Nature this past March, which paints a dire picture of the state of U.S. lakes and rivers, focusing on cattle as a major driver of our freshwater shortages. And the condition of the Colorado River gets special coverage in the article, because while it’s bad enough that 23% of U.S. water consumption goes to growing crops just to feed cattle for beef and dairy products, in the Colorado River basin it’s over 50%. For Arizonans this means that the environmental benefits of reducing or eliminating beef and dairy from our diets aren’t limited to reducing greenhouse gases and nitrogen pollution, but could be the solution to our freshwater crisis as well. 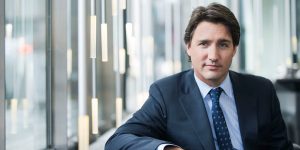 In the middle of a global pandemic and related economic crisis, Canada’s Prime Minister Justin Trudeau has apparently not lost sight of the long-term. Or maybe he’s taking seriously the “build back better” mantra of economists and environmentalists. Either way, his decision in late June of this year to invest $95 million to support alternatives to animal protein was exciting news for plant-based advocates. The money goes to a Canadian company to develop new sources of plant-based protein based on Canadian canola and yellow pea crops. At a press conference announcing the investment, Trudeau said, “As people around the world start eating more plant-based products, we have an opportunity to bring together Canadian innovation and Canadian crops, and a chance to create good, well-paying jobs.” Smart! 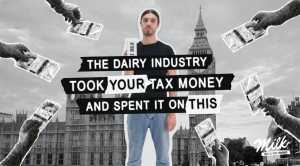 In response to a desperate and expensive campaign by the milk industry in Great Britain to revive lagging sales, plant-based Britons have started their own campaign. In addition to ramping up general education about the environmental benefits of plant-based milks over cow’s milk, this campaign includes a change.org petition drive, with tens of thousands of signatures, asking the British government to provide monetary support to farmers who are willing to transition from raising animals to any number of earth-friendly alternatives. “Earthling Ed” (Winters) and his Surge organization (https://www.surgeactivism.org) are a driving force behind this campaign, joined by two organizations that are dedicated to helping farmers transition: Refarm’d (https://en.refarmd.com) and Farmers For Stock-Free Farming (https://farmersforstockfreefarming.org/100-ways-to-farm-stock-free). They even have an information pack for farmers, which contains detailed ideas for alternative land use, funding options, and many more resources. Is there anything like this in the U.S.? Please?